Ah, so it is a purely D tuning. It was the description of it as "English G/D Tuning" that got me confused.

I thought you were aiming to create a diatonic that could play equally well in G and D, but actually you use two harps in different tunings.

Which do you prefer, your English G or English D tuning? I have to be honest and say that I'd tend to choose the one I liked the best, then have that same layout in the two keys. It would seem to help with learning the music if you only had one tuning to master. What's the advantage of using the two different tunings for G and D?

When I was playing Paddy richter tuning and needed that c# I tried to make a single 10 hole diatonic for both G and D
that's when I found G Major cross and added the bottom 4 notes and I got the bent c# on hole 6 but found it difficult
to get things smooth if jumping to that bend from nearby holes.
So that's when I tuned a separate harmonica with the only difference being the c#.
Certainly in the tunes I tend to play the c#s in G tunes are usually preceeded or followed by a d so no moving from other holes.

Which do I prefer? They're both the same so no preference really, tunes in G,Em and Am I play the 'G', tunes in D the 'D'.
The odd tune I have in G dor, like Cuckoo's Nest I play he D harmonica as there's no c nats.
Top

Sorry it took a while but I get it now: same core tuning but with the root note of the two keys in different places, hole 1 and hole 3.

I think I found it confusing as I've never used the concept of tuning two harps as a linked pair - I've always thought of each as separate but which I'd sometimes play together in a set, so tuned all the keys with the same pattern (ie. root notes in the same physical position on the harps regardless of key).

Your approach makes sense for fiddle tunes as you have the same RANGE of notes in both G and D harps starting on the low G, which is the low open string on the fiddle. It's logical for playing the two harps as a pair, as on the Sampler you've ordered.

It works well for G and D, which both start on blow notes - so the melodic patterns are the same but in different parts of the harp. But what about other keys? If you tuned a pair of harps for C/F would you retain them as hole 2 draw and hole 4 blow notes in their current position on the G/D harps but retune the appropriate notes (eg. F# to F), or transpose the scales entirely to the same pattern as the G/D pair?

Having thought about it the ideal of having a paired set of harmonicas probably comes from me being primarily a whistle player for the last 10 years.
With whistle we play G, Em, Am and D plus some others on the same instrument, all the notes are in the same place so doing the same with harmonica
was a natural way of tuning for me.
As for other keys I have tuned an A like this.

I think, that I can follow Nick's intention.
Quite interesting experiment that could work.
If I have misunderstood something, please correct me.

I use harmonicas with different layouts as well, each one for that tune, to which it fits me best. I change often between harmonicas with different layouts within a set or even within one tune, not minding if they require different patterns to play them. Each tune might require its own special pattern. And that wants to be learned, exercised and getting used to for an optimal outcome. And I always try to use the tuning and layout that fits best to my intentions.

For example I interchange some times between Brendan`s Irish Session Harp and the Seydel Sampler. Despite they are both tuned in G + D, they have a different character in playing, due to the fact, that on Brendan`s ISH the D-plate is 1 octave lower than on the Seydel Sampler, and to the different technics of the slide (active push and draw vs spring controlled release). That makes a huge difference - with the same tuning and layout.

For Baroque tunes, chrorals, christmas carols etc I prefer the ISH to the Sampler, as an example. And for reels, jigs etc that stay within 1 mode I prefer the 10-hole Paddy Slide Diatonic instead.

If there should be an interest in discussing the differences between the ISH and the Sampler and some other slide diatonics, we better might open a new thread for that. I barely mentioned this here as an example to describe, whether I have understood the arguments between Nick and Brendan or not.


Nick wrote: ↑
Tue Apr 11, 2017 9:22 pm
Here's an example of what I like to play, Lester Bailey on melodeon.
I get a lot of tunes from Lester's blog. Nothing fancy just Lester playing.
http://lesters-tune-a-day.blogspot.co.u ... kstep.html 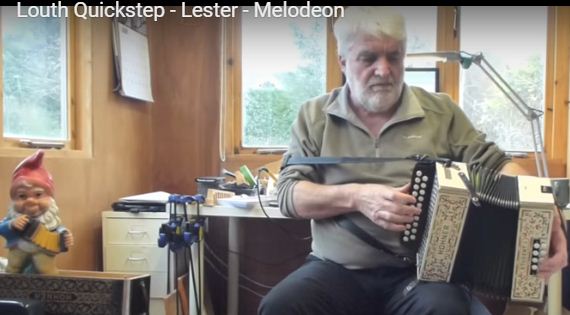 I didn't know that they have these in England too.