Currency Converter
As you can probably tell from the name 'Brendan Power', I have an Irish background. Though born in Kenya and raised in New Zealand, I heard Irish music as a kid on my Dad's records, and always loved the sound. Inspired to pick up the harmonica after hearing the sublime Sonny Terry play the blues, it wasn't long before I was starting to try and play the Irish tunes that had appealed to me in childhood.

I soon found that standard harmonicas had some serious limitations when it came to emulating the flow, speed and beautiful ornamentation characteristic of traditional Irish music, as played on the commonly-used instruments such as fiddle, flute, whistle, pipes and button-box. I wanted to get 'that sound': to augment the harmonica's natural soulfullness with truly authentic stylistic expressions to create a harp style which respected the traditional approach but added a new voice.

I studied the music intensively, and found that the only way to achieve what I was after was to change the harmonica itself. The three main innovations I have created for Irish harmonica are Paddy Richter Tuning, the Slide Diatonic, and the Irish Session Harp. However, these tunings and harmonicas are great for other types of folk and melody playing too.

Paddy Richter Tuning is a whimsical name I coined for this slightly altered scale, as it was originally for the small 10 hole diatonic - which is in what's commonly called Richter Tuning. It involves just a small change: raising the 3 blow a tone to get the missing sixth in the home scale. That tiny one-note change makes a huge difference! Suddenly you can play Irish jigs and reels on the diatonic harp with great speed and facility.

I first recorded with Paddy Richter on my 1994 album New Irish Harmonica and since then it has become widely known and quite popular. I've written a book for it, and also offer hand-tuned Paddy Richter diatonics to go with the book or buy separately.

The Slide Datonic comes in 12 hole Solo Tuning and 10 hole Paddy Richter Tuning. It is a retuning for slider chromatic harmonicas that gives the player in-key slider notes. The slider is great for trills, turns, cuts, rolls and other decorations characteristic of Irish music, but it always raises the note a semitone. You can get away with it, as the slider notes go by very fast, but it is not really authentic for the modal-based scales of the Irish tunes. To overcome that problem I retuned the slider notes to the home scale of the instrument, to give a really sweet, authentic traditional sound akin to that of the whistle, flute and fiddle. Check the links above for more info and to hear the Slkide Diatonic in action.

My unique Irish Session Harp is a single harmonica with the two main keys of Irish music (G and D) built in! The slider has no spring, so you can instantly select one or other of the keys without changing harps. I first sold it as the Trad Session Harp from 2000, and it's now available again. The Irish Session Harp comes in two versions: 12-hole Solo Tuning, and the latest, 10-hole Paddy Richter Tuning. Click the links for more info and video clips.

These harmonicas are not just for Irish music. Many use them to play other folk melodies, and even pop tunes! I have found the Slide Diatonic is also great for Chinese music, as the slider trills emulate the sound of the Dizi, the popular Chinese flute. You can hear the Slide Diatonic playing a Chinese tune below:

The Slide Diatonic is another of my harmonica inventions. I first recorded with it on my 1994 album New Irish Harmonica, and I've used the Slide Diatonic for all my traditional Irish playing ever since. It's now available to buy, and only on this website.

The Slide Diatonic comes in the two main keys for Irish music, D and G, as well as C. The 12 hole is in Solo Tuning (same as standard chromatics), which is a great tuning for trad music, and probably the easiest to use.

I've had a couple of versions of the Slide Diatonic over the years, the first made by Hering and the Mk2 by Easttop. It's really airtight and comfortable in the mouth, with a smooth slide action. Please check the video below to see the Mk 2 version, and check the earlier video for the Mk 1 model to hear how easily and sweetly the Slide Diatonic adds in-key decorations to the main melody. The Mk2 model has the added benefit that you can remove some outer valves for extra bending if you wish (demonstrated in the Mk 2 video). 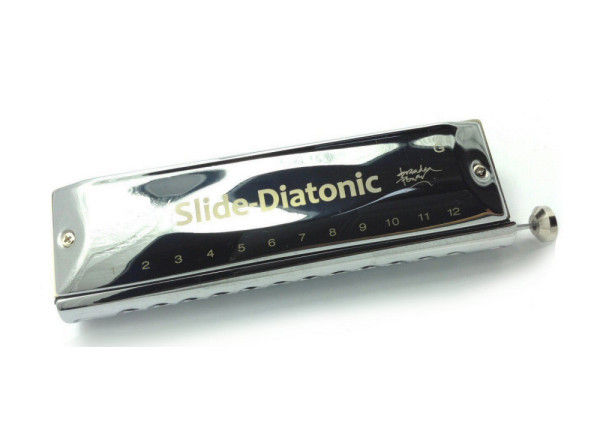 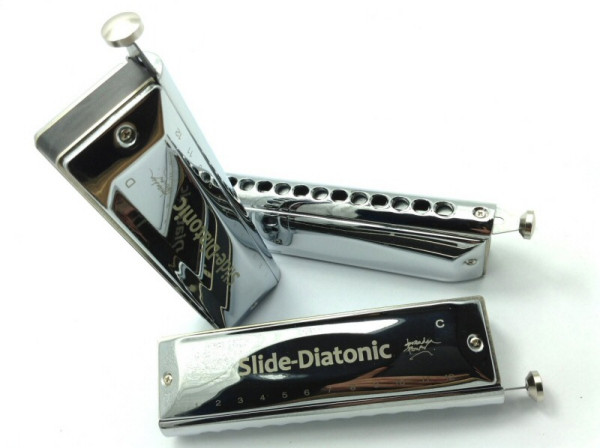 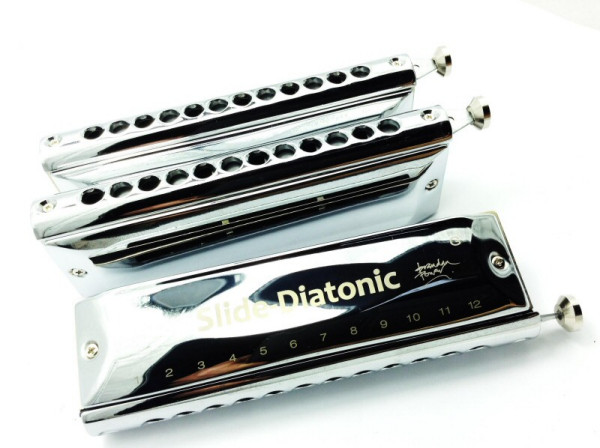 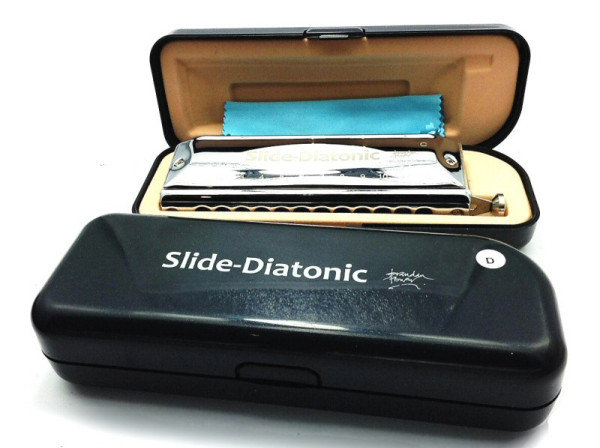 The Mk 2 model also comes in the key of C, as well as D and G. It will suit players who prefer to use C chromatics normally, as well as add an extra useful key for the G/D players.

These harmonicas are sent to you direct by my good friend and business partner Roland, in Shanghai. This helps us to keep prices low and re-stock quickly. We use a respected Chinese courier company with tracking on all orders. In the rare event that your parcel gets lost, the courier company will need your contact telephone number. The number will come through automatically from PayPal so please ensure it is uptodate. Without a valid phone number we cannot guarantee delivery.
On the outside it looks like a standard chromatic harmonica, and the home scale with slider-out remains the same. But as soon as you press the slider in, you hear the difference! The slide-in notes sound sweet and tuneful, and slider trills are pleasing to the ear. That's because all the slider notes have been tuned to the home key of the harmonica - hence the name Slide Diatonic. Below are the tuning charts (click to enlarge): 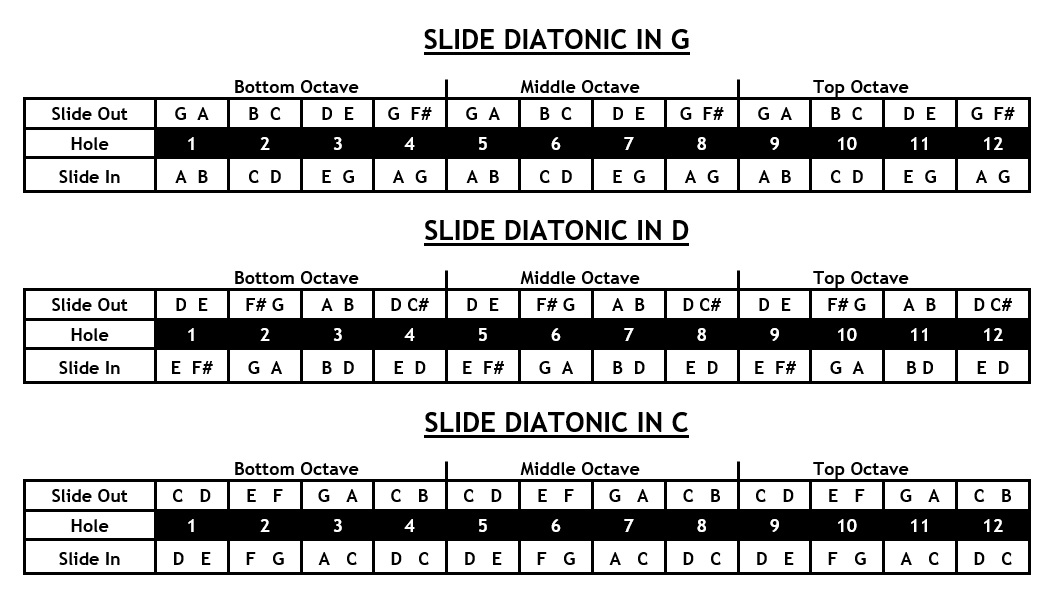 You can see the slider note is invariably the next note of the home scale. This gives the player a whole new and more AUTHENTIC sound for playing Irish and other folk music, including Chinese, Scottish, Italian... Most folk melodies around the world stay within a specific mode or scale. Chromatic notes outside that scale tend to sound harsh, because they are inappropriate for the style.

There is one small exception, which I’ve incorporated in the models we sell since the videos above were made. In holes 3, 7 and 11, the draw slide note raises to the tonic note of the scale instead of the 7th. I’ve found in practice that this works better, for various reasons:

The Slide Diatonic also gives the player lots of enharmonic (same-not choices). Every note of the scale is duplicated in a slide-in note, which allows the player to choose the best option for the music. This can be very helpful in playing fast dance tunes with big jumps.

The 12 hole Solo-tuned Slide Diatonic comes with handy In-Box notes, showing the scales and other useful information. If you want more in-depth playing instruction for Irish music, my existing Book/CD package Play Irish Music on the Chromatic will work well with the 12 hole Slide Diatonic. It gives you all the info and tab for easy exercises and many tunes. Though the CD tracks feature standard chroms in G and D, the slider decorations taught will sound even better on the Slide Diatonic. At some stage I will create a book/CD specially for the Slide Diatonic, but for now that is a very good option. There is an equivalent book for the C instrument too, called Play Irish Music on the Key C Chromatic. Here are some handy tips to fix sticking valves and enhance airtightness on your slider harmonicas.

" Thanks Brendan. I absolutely love these harmonicas. I have played the G one constantly since I bought it. "

Paddy Richter is the whimsical name I gave to a simple tuning I devised to play Irish music on the 10 hole diatonic harmonica, first recorded on my New Irish Harmonica album of 1994. The standard harp tuning is known as Richter Tuning, the Irish are often affectionately called Paddies... and so Paddy Richter was born.

Along with Paddy Richter tuning, I also invented half-valving on the harmonica (there is more detailed info on both further down the page). Half-valving really helps on harps used for Irish music, because it makes the important blow notes play louder, sweeter and with more soul.

You can order the same excellent Suzuki Promaster MR-350V Half-Valved harmonicas in Paddy Richter Tuning that I use for Irish Music, in all 12 keys (plus Low F and High G). All harps are retuned to Paddy-Richter by hand. Check the many positive Customer Comments on these harps.

For those who want a great-playing half-valved Paddy-Richter harp while saving a significant amount of cash, I'm proud to announce my own-brand model - manufactured for me by Easttop. It has a couple of unique features to make it even more user-friendly! First, I've added a Look-Dot (position marker) on the middle front of the comb; with a quick glance, this will orient you on the harp so you never lose your place. Second, I've added a seventh inside valve to give extra soul and volume to hole 7 blow - a very important note for playing all the main positions in Irish music. Without realising it, players put too much pressure on this reed, often causing it to fail. The extra valve will protect the 7 blow reed as well as allow you to add valved bending and vibrato to it – a win-win! Available in the keys of G, D, C & A. I'm really pleased with how my own-brand Paddy-Richter harp plays – you will be too 😊 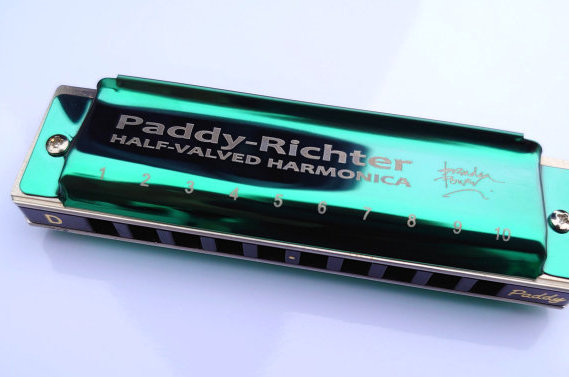 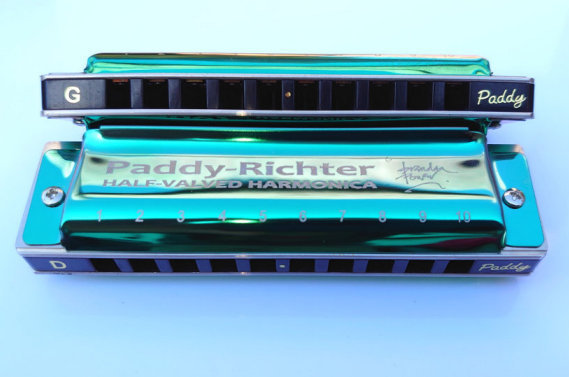 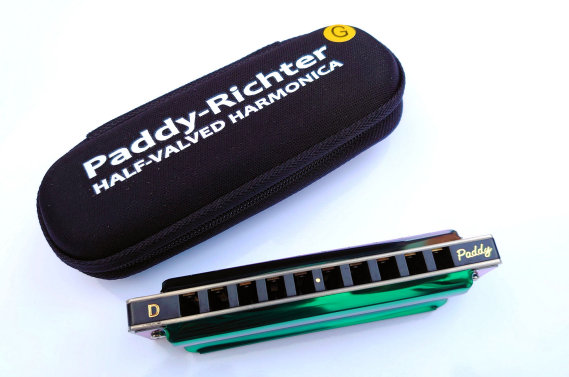 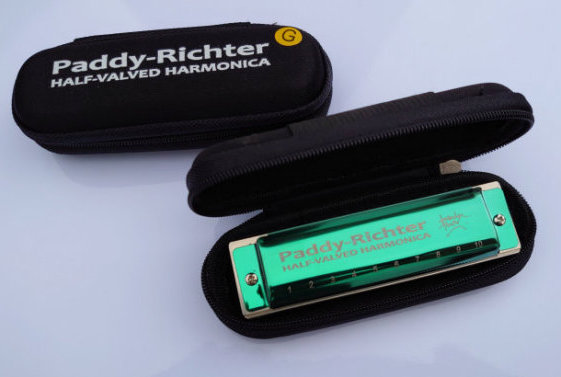 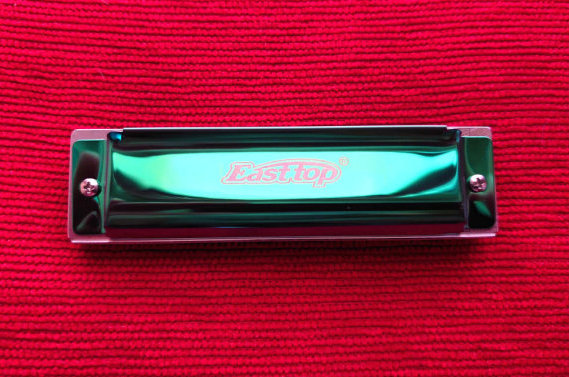 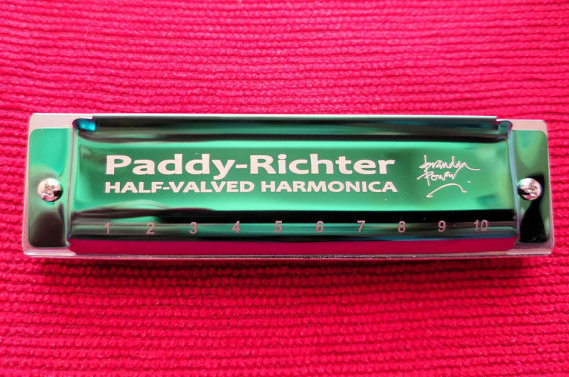 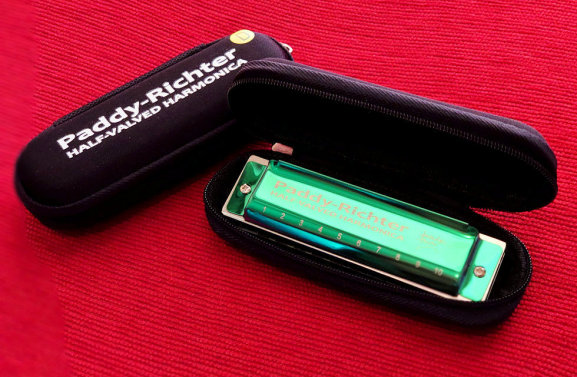 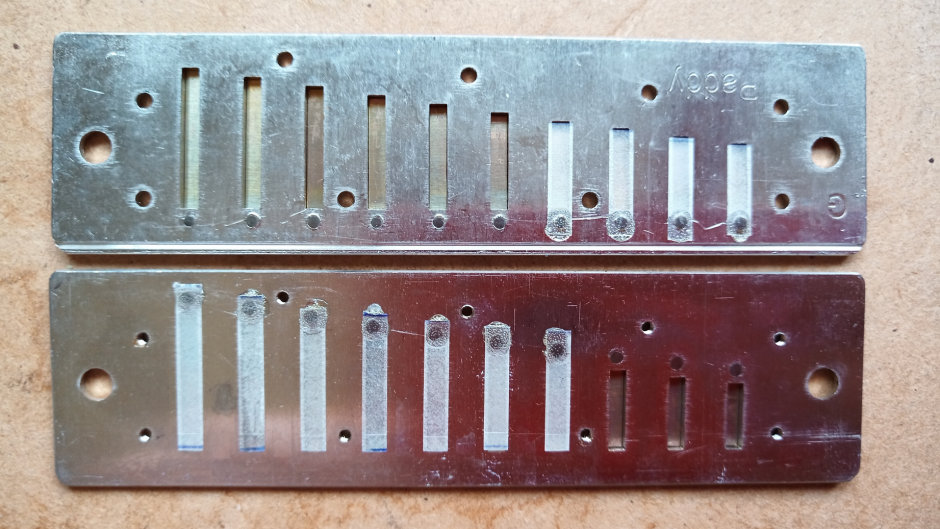 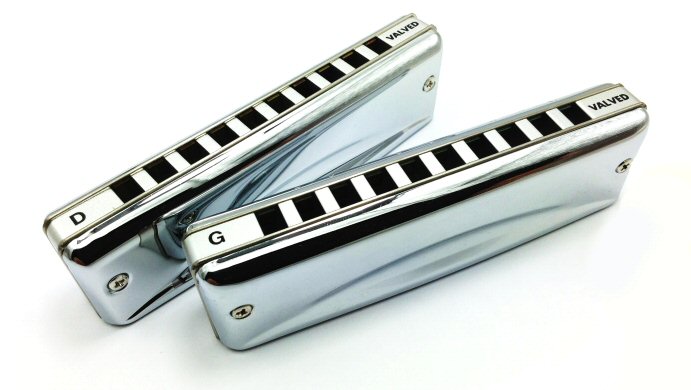 Suzuki have famously durable reeds, but even they will fail after a lot of use. If a reed goes on your Promaster you can save money by buying replacement reedplates instead of the whole harp. The new plates are already in Paddy Richter tuning, and it's a simple job to swap out the old ones.

I'm now also offering Paddy Richter in 13-hole 4 octave format, in the form of my unique Lucky 13 harp. It gives you all the benefits of PowerBender/PowerDraw/Paddy Richter (choose one as appropriate), PLUS an extra low octave to extend the range. The Lucky 13 is like two harps in one, excellent value and a very good harp out of the box.

Paddy Richter tuning only has one note different to standard Richter, but what a difference that small change makes! On a normal harp, hole two draw and three blow are the same note. I took advantage of that duplication to raise three blow by a tone to get the missing note you normally have to obtain via a tricky draw bend. On a G harp it would raise the D in hole three to E:

This makes a massive difference to the ease of melody playing on the 10 hole harp. Suddenly tunes that were very hard to play lay out beautifully - including Irish jigs and reels. These are played fast, and it's impossible to get that essential missing note (the 6th of the home scale) accurately at speed via bending. Paddy Richter builds it in to the scale as a simple blow note on hole 3. Suddenly the humble blues harp is transformed into an instrument that can easily keep up with flying fiddles, pipes and flutes at an Irish session!
Here's a famous reel, "The Bucks of Oranmore", played on a Paddy Richter harp in D:

Below is a video demonstrating Half-Valving:

I've written a popular Instruction Book with 55 Track CD demonstrating how to play Irish Music on the 10 hole harp, including Paddy Richter instruction and examples. Click the link for more info and check out the comments on the book/CD and ProMaster harmonicas from many satisfied customers.