Overblowing is the common term for an increasingly popular technique used by players of the 10-hole Richter diatonic harmonica to obtain missing chromatic notes on the instrument. A more accurate term is "overbending", because it can be done on both breath directions: blow notes are raised with overblows, and draw notes with overdraws. Even though they are different, the widely-used term that applies to both is Overblowing. Combined with traditional interactive-reed bending (which lowers reed pitch), overblowing raises the pitch; using both techniques players can achieve a full chromatic scale on an ostensibly diatonic instrument.

But it's not quite that simple. For overblowing to work well, the harmonica needs to be finely adjusted, with close reed gaps and slot-embossing. Out-of-the-box harps will overblow, but any serious player who uses the technique will either buy expensive hand-customised harps, or spend considerable time working on their own harps to optimise them for overblows and overdraws. Even with such customisation, overbending is a high-level playing technique that takes years to master throughout the whole range of the harp. As a result, the number of really good overblow players in the world is still small, even 40 years since the technique became widely known. Harmonica chat groups are littered with posts describing the struggles of beginners trying to incorporate overblows and overdraws in their playing. 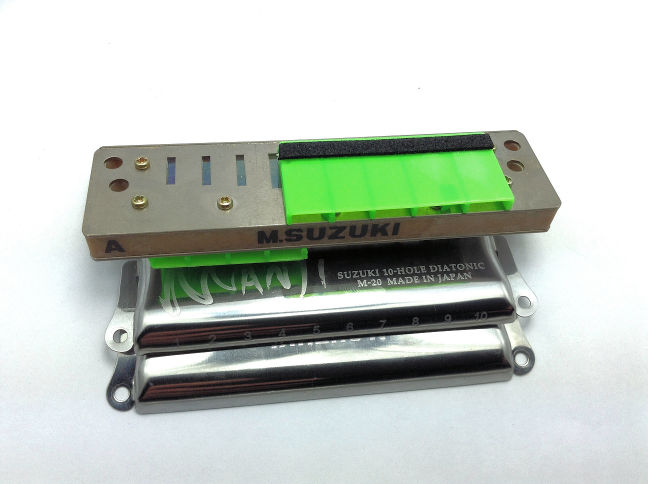 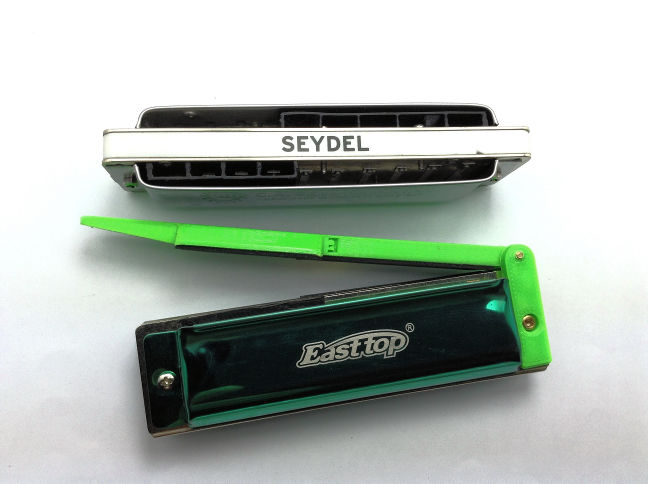 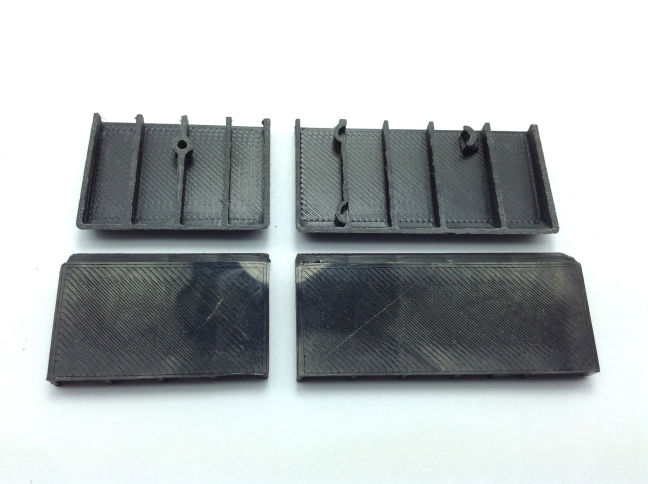 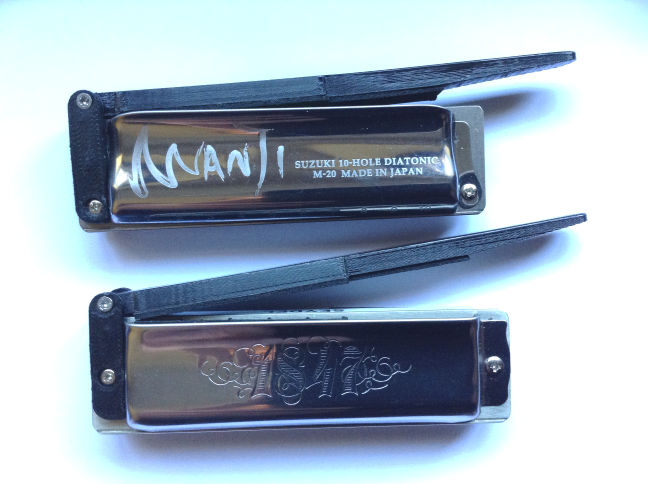 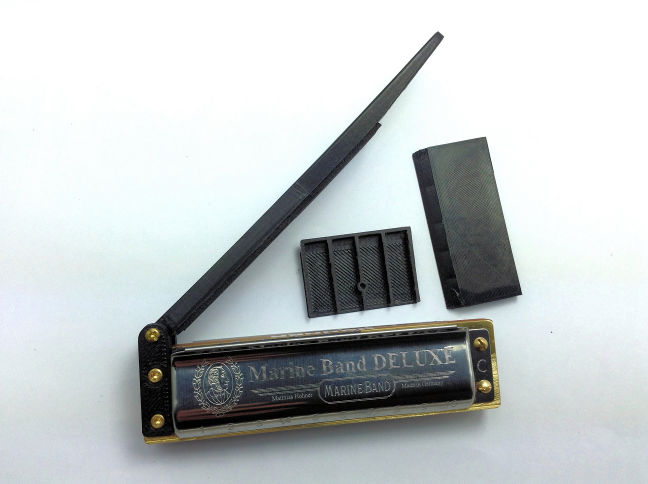 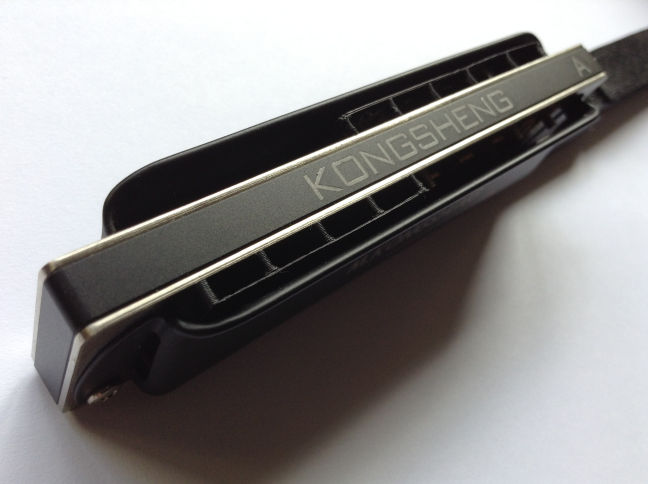 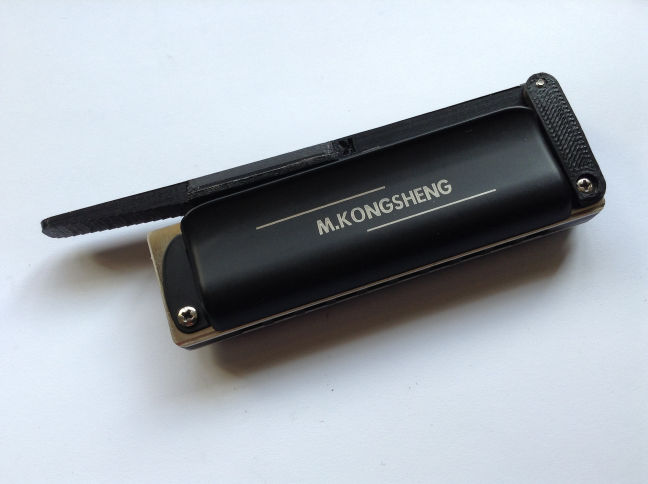 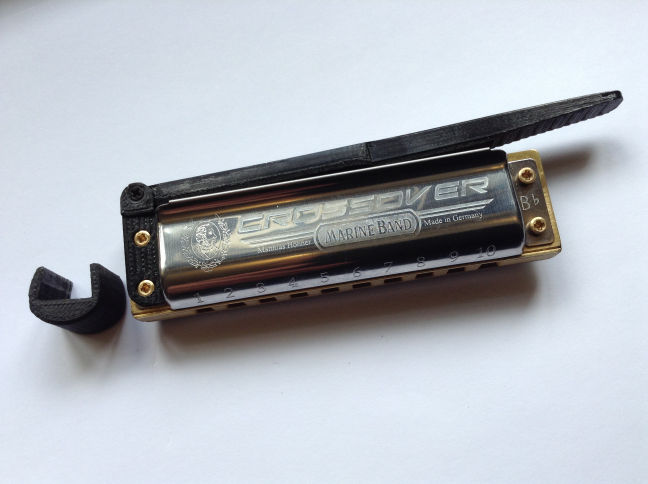 My Overblow Booster makes overbends much more user-friendly, enabling total beginners to overbend with ease straight away - all the way from hole 1 to hole 10! For advanced players, it enhances their sound, volume and expressiveness. It gives greater control of both overblows and overdraws, allowing easier bending of them, adding soulful expression such as vibrato on overbends, plus new effects never before possible. The Overblow Booster works great on standard harps without any special gapping or embossing. Even the difficult-to-get overblow in hole 1 is now a breeze to get on a stock harp out-of-the-box! On a fully customised harp the overblows will sound and play like butter, sounding as strong and expressive as standard bends, and give expert overbend players a whole heap of extra fun. Watch the video to see/hear for yourself.

For a long time it's been known that if you stop the lower-pitched note in a chamber from sounding, the overblow/overdraw plays much more strongly. Various harps have been created in the past to make this happen, but none succeeded - because they were either too complicated, too expensive (often both), and forced players to buy new harmonicas. My Overblow Booster is far simpler, cheaper, and doesn't require you to buy a new harmonica: it can be added to your favourite harps in under a minute, and removed just as quickly! 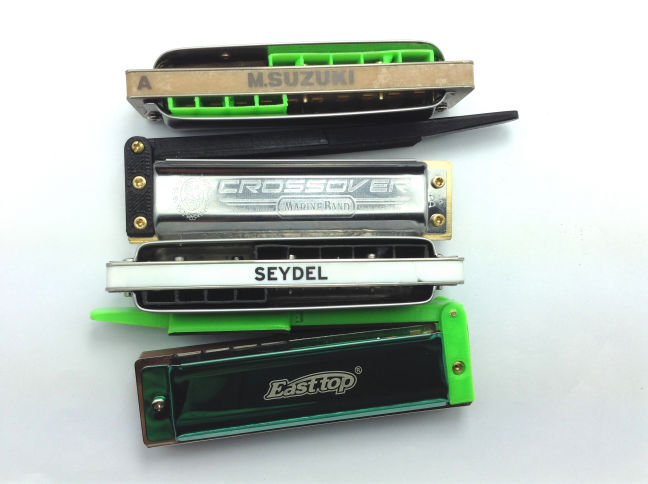 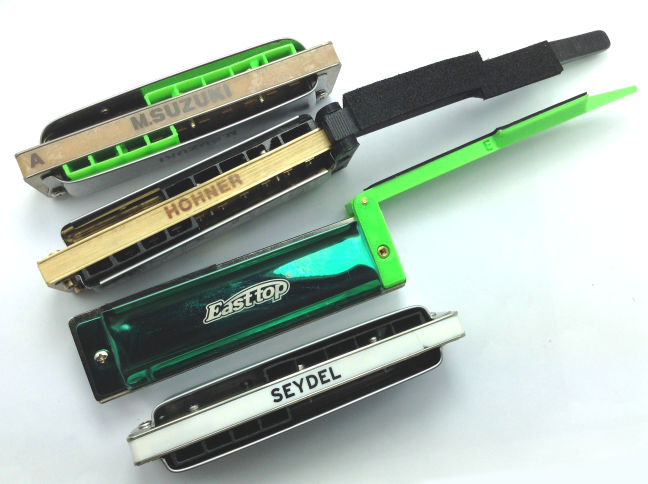 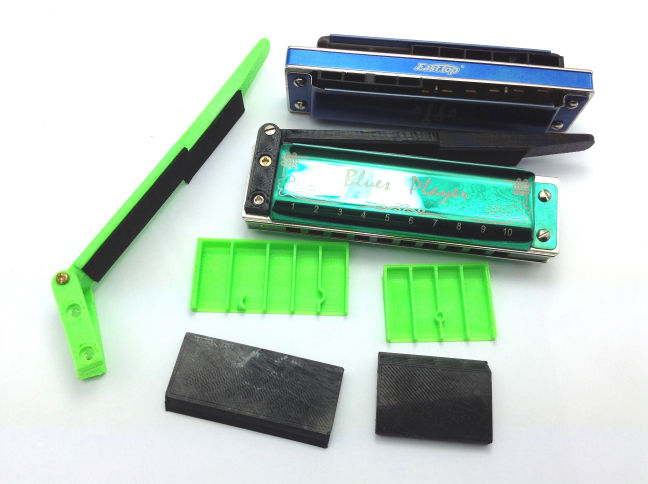 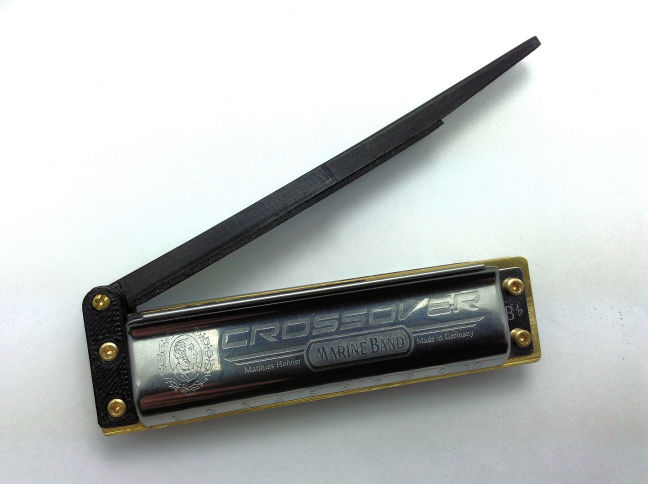 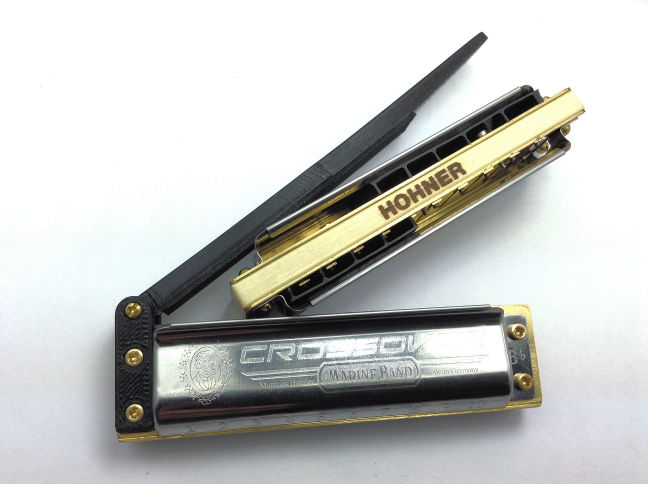 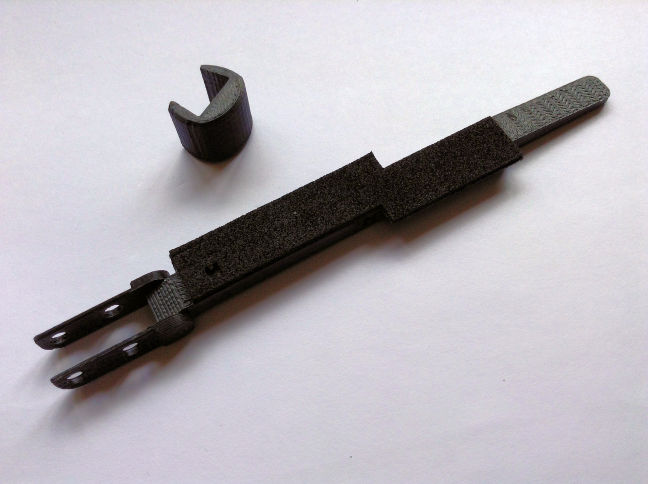 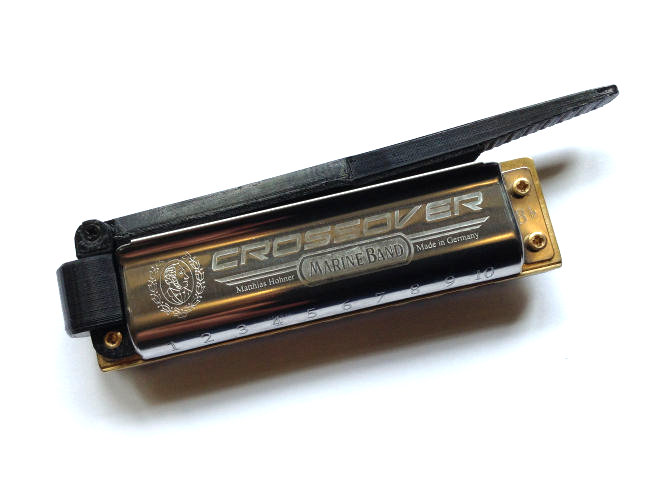 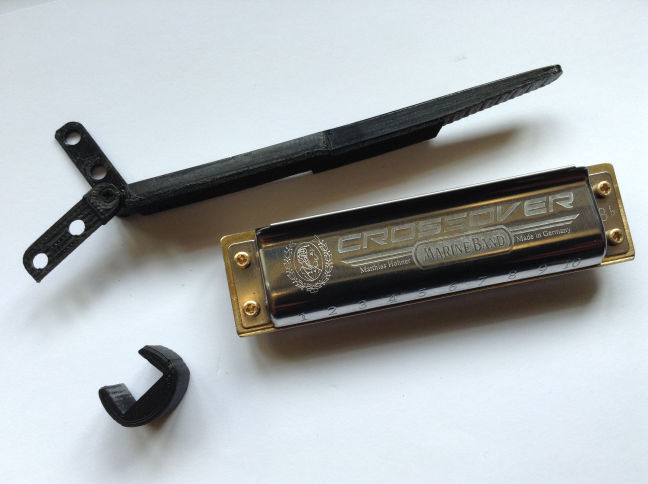 The Overblow Booster only works with harps that have open-back covers. These include the Hohner Crossover & Marine Band Deluxe, Seydel 1847, Suzuki Manji, and some of the models from the excellent new Chinese brands Easttop and Kongsheng. Make sure the harp you are ordering for has open-back covers; select the brand and model in the drop-down list. It comes in two versions: Basic and "Full Monty". The Basic version comprises two light ABS plastic parts that sit almost invisibly beneath the coverplates, fitting snugly to the harp with small tabs that correspond to the reedplate screw positions for each model. The open outer ends of the individual reed channels can be closed with your fingers as you play, thus stopping the inactive reed and making the overblow/overdraw much stronger, and play with greater control.

The Full Monty version adds the Booster Bar: a rear hinged lever attached at the bass end of the harp that closes all the coverplate channels with one quick movement - thus avoiding the need to select the individual channels with your fingers. The Booster Bar's neoprene pad seals to the channel openings when closed, but the harp plays normally when it's held away from the back. It doesn't affect the tone of the harp, hand wah-wah effects can be used on all notes (including overblows/overdraws), and it works well with a handheld microphone too. Watch the first video from 9:15 to see the Booster Bar in action!

The Overblow Booster requires harps with open-back coverplates, such as the ones listed below. However it can be added to other harps (eg. Hohner Marine Band 1896) if the rears of the covers are opened up. Here are the prices for the Basic and Full Monty options; choose the harp model that you want to fit your OBB to.

The OverBlow booster products are currently unavailable while we work on a new and improved design
All prices include international shipping. Orders over £60 will add Tracking
Update 14 July
I've now updated the Hohner version of the Booster Bar to a quick-release attachment system: it can be snapped on and off in seconds, and you can switch it over to another harp. This means for Hohner harps, if you wish, you only need one Booster Bar for multiple harps. This saves you money! Check out the Quick-release Booster Bar in this video 0:10-1:45 I'm developing the quick-release system for the other brands/models - but for now, they all have the screw-fit Booster Bar.

FITTING - it's a Breeze!

If you want to get playing straight away, simply remove your coverplates, position the two parts of the Overblow Booster in place, replace the covers and start overblowing! The longer part goes on the blow reedplate, the smaller one on the draw reedplate. It’s pretty obvious how they fit around the reedplate screws; watch the video on the main page from 7:20. However, I recommend you take a bit more time to get the seal on the lower surface of the Overblow Boosters really airtight. For a demonstration of some simple steps you can take to that end, as well as advice on fitting the Booster Bar, please watch the video below.

Listen to the multi-talented Ross Garren in this video of his impressions.

" I heard about the Overblow Booster from my teacher, Clint Hoover, and having 'hit a wall' in developing overblows, we thought it could be a good way for me to experience the proper embouchure to get them going across my diatonic harmonicas. After mounting mine on a C Crossover, both Clint and I were startled by the strong, clear and expressive overblows I immediately got. You should hear what Clint did with it! It's designed and constructed very well and durably - I understand you have used 3D printing to develop the prototypes, and the lever basically gives me a chromatic harmonica. I only have one problem with it - it's too easy! We are trying to use it as if it was a set of training wheels on a bicycle, getting an overblow and then carefully opening the lever, but obviously I'm still relying too much on pressure and the overblow disappears when the lever opens. Working with it is improving my overall tone, anyway, and even if I never learn to overblow without it I'm happy to have an Overblow Booster. If you have any suggestions for Clint and me about generalizing overblow skill to unequipped harmonicas, we'd love to hear them. Thank you for your musical genius! "

An impromptu late-night SPAH clip from Swedish harmonica maestro Filip Jers. Filip finds the Overblow Booster very useful for getting overbends on low-key harps (like this Low Eb Manji), which is normally very difficult. Apologies for the poor sound from my phone! Check out Filip's website for more of his music.

Listen to the super-talented Chinese player Long Deng Jie trying out the Overblow Booster at the Asia Pacific Harmonica Festival in Beijing 2018. The harp is a standard Easttop 10 hole, with no reed gapping or embossing:

Check out the in-depth review and demo of the Overblow Booster by Christelle Berthon in this video.

" I recommend you try these Overblow Boosters Brendan's come up with.

I tried them out on a standard out of the box Marine Band Crossover - I wonder how they would work on a custom harp?

Not only will you get the 'overbends', you will also get further bends on each one - the pitch shift on my A harp was a major 5th pitch raise on the overblows and a little less on the overdraws.

Now you are pitch bending the overbends - who knew that was possible?

You will also notice drawbends are now possible on hole 5, blowbends on hole 7.

This is a similar effect that you can get with the expensive and now ex-production Suzuki Overdrive (with 20 cover plate holes) and the Bahnson Overblow Golden Melody with a button.

The optional extra 'Booster Bar' - which now has a quick release cullet attachment so so would only need one bar for all your boostered harps - serves to close all the holes at the same time in a simple hand movement.

One of my friends - let's call him Pete - had never achieved an overblow until I forced him to try the overblow booster. It taught him a lot about the technique, so I guess it also has merit as a learning tool - like stabilisers on a bicycle.

So with the increased range of notes available, your capacity for playing different tunes, scales, and keys, your improvising takes a sudden leap forward.

With the boosters in you can choose to ignore them completely and the harp is as 'normal'. You can use hand vibrato, microphones - all as usual.

With a custom harp many of these things are also possible so compare the cost of a good custom job with the overblow boosters.

Must be worth a try for everyone I think - and I believe they are cheaper if you buy a set of 12 or so. You probably need to ask Brendan that question unless he puts that as an option in the cart which I would encourage him to do. "

" Finding that the one and four overblow adds many new options to first position blues !! Having fun with that. Still tweaking the harps but the overblows and overdraws are coming easier now. Thanks again for your innovation. "