Currency Converter
This section is devoted to a new and exciting kind of harmonica, with extra reeds for extended note bending. These extra reeds have been called auxiliary reeds, enabler reeds, sympathetic reeds... But I simply call them X-Reeds.

The x-reeds are set with a zero gap in the reedplate, sounding only when you adopt the bending embouchure to enable the active reeds to bend. X-Reed harmonicas come in triple-reed or quad-reed types.

In a triple-reed type, you have three reeds in each sound chamber. Assuming the active reeds are tuned a tone or more apart, customary bending is on the high-pitched reed, which interacts with the other active reed in the hole to get a bend. Let’s use hole 4 on a C harp as an example : you can bend the D draw down to C# because it interacts with the C blow reed.

So far so normal. But the x-reed (a reed with zero gap of the opposite direction to the low-pitched reed, a draw reed tuned to Bb or lower in this example) now allows the usually un-bendable blow C to bend as well! Because of the zero gap it is usually passive, but it vibrates to give the bend note as soon as the player initiates the bend on the blow C. The Suzuki SUB30 is an example of the x-reed triple type.

That's the principle, and it can be extended to a quad-reed type where there are four reeds in the cell: two active reeds and two x-reeds. This allows the bending of each active reed to be determined by the tuning of the x-reeds, allowing all sorts of bends to be possible. The Hohner XB-40 is an example of the x-reed quad type.

I was one of the two independent inventors of the X-Reed harmonica concept, and created the world's first working 30-reed 10 hole harmonica in New Zealand in 1989 (a triple-reed design made from a Koch chromatic). Things should have progressed quickly from there but inventions often become ensnared in legal issues, and this happened with the concept of extra bending reeds in harmonicas. In the process, development of the idea was halted for many years. It's a long, winding, fascinating story featuring several key figures: you can read about it here.

But now, after a long period of court wrangling and design stagnation, the legal barriers to harmonica progress are in the past. I am finally free to pursue my original vision, and two years ago combined with my partner Zombor Kovacs to offer adventurous players who want to explore the X-Reed concept the very best harps available, from our website x-reed.com.

We have come up with several innovations to make x-reed harps work much better, notably the X-Reed OverValve Plate and the Z1 comb In addition to offering x-reed harps on the x-reed site, some of my own designs are also offered here. The first is the ChromaBender, a bending harmonica in the 12 hole Solo tuned format. More in the pipeline, watch this space!

I've always loved listening to Indian, Chinese and Arabic music, and a few years ago started studying these great Eastern musical traditions more closely. A big part of the attraction for me was the use of exquisite microtonal bending on all notes in their scales (known as Ragas in Indian Music, and Maqam in Arabic). I was especially inspired by the soulful wide pitch bending in Chinese music, on such traditional instruments as the Erhu and Hulusi. But when I tried playing along on conventional harps, it just didn't work - not nearly enough bending available!

I found I had to create an entirely new harmonica to achieve an authentic sound for Chinese and other Asian styles. I first used it on my album New Chinese Harmonica - you can hear clips from it here. I soon found the harmonica was great for playing Western melodies more expressively too, and started using it on my gigs. The album and live shows generated many requests for the harmonica itself, so here it is: the AsiaBend! 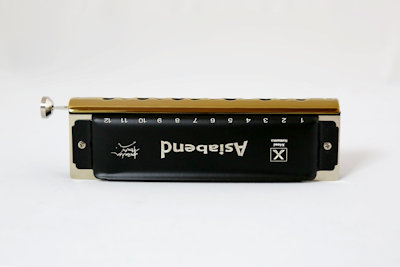 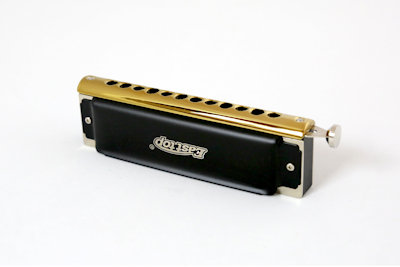 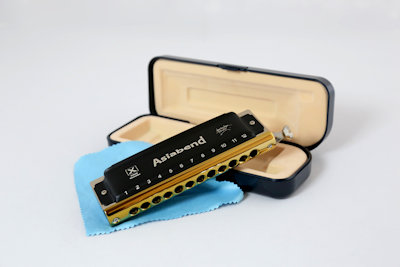 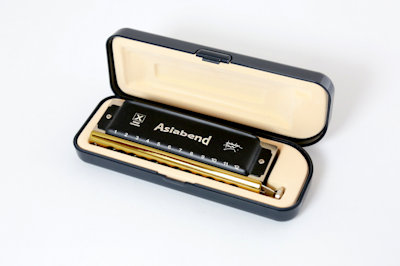 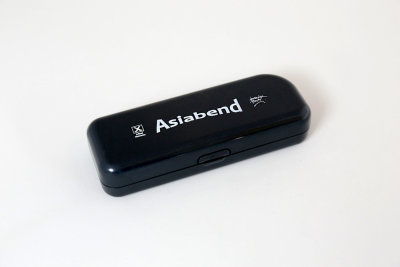 Click to enlarge, click outside the photo to return.
See the original look AsiaBend
It looks like a chromatic harmonica, but it's not! You'll instantly realise that when you check out the videos below. Strat with th top-right video and go around clockwise. As you will hear from the videos, this is a completely new harmonica type with a unique sound: an all-draw, all-bending soul machine! It has Patent Pending status for its many novel features.

Unlike other harmonicas of similar universal bending ability (eg. the XB-40), my AsiaBend uses only draw breath direction throughout the whole instrument to create the main scale and bent notes, and has no windsaver flap valves! Instead of valves the AsiaBend uses the slider action of an airtight chromatic harmonica to isolate reed pairs and select the bending function. It employs normally-silent blow x-reeds paired with active draw reeds to allow every draw reed to be bent controllably in pitch to adjacent scale notes. Its scale layout is designed to allow the player to controllably bend every note of a diatonic major scale (and related modes) up to and down from other notes of the scale, as well as microtones in between. The fact it has no valves means that the overblow technique is available on every hole to obtain extra chromatic notes.

Bending on the AsiaBend is exactly the same type of interactive-reed draw bending as on diatonic 10-hole harps. The scale is similar to the middle octave of a diatonic, or Solo tuning on chromatic, with a 3 octave range. So it will be easy for both diatonic and chromatic players to adapt to. The layout is:

These are draw notes only. The notes all bend down to the adjacent scale note below with the exception of the G (bends down to E) and the left-hand C (bends down to A). Blow notes don't sound in normal playing but there are overblows on every hole, slide-in and out, which give these notes: C#,D# - F,F# - G#,A# - C#,C  (they are repeatable in all octaves).

Remember: THIS IS AN ALL-DRAW HARMONICA. No blow notes at all! (Think of it as the opposite of a saxophone or flute, which are all-blow instruments. There ARE blow reeds inside, but they don't make a sound if you try to blow - they only act to allow the draw reeds to bend). Please make sure you understand this principle before you order. The videos show how it's done.

This amazing new harmonica won't break the bank! You can get all that note bending soul for just £80 (about USD$100), including International Tracked Postage. That's very little to spend to get yourself an incredible new sound using your existing draw-bending skills. The AsiaBend makes ANY melody sound great - try it and hear for yourself!

These harmonicas are sent to you direct by my good friend and business partner Roland, in Shanghai. This helps us to keep prices low and re-stock quickly. We use a respected Chinese courier company with tracking on all orders. In the rare event that your parcel gets lost, the courier company will need your contact telephone number. The number will come through automatically from PayPal so please ensure it is uptodate. Without a valid phone number we cannot guarantee delivery.

All prices INCLUDE International Shipping with Tracking. 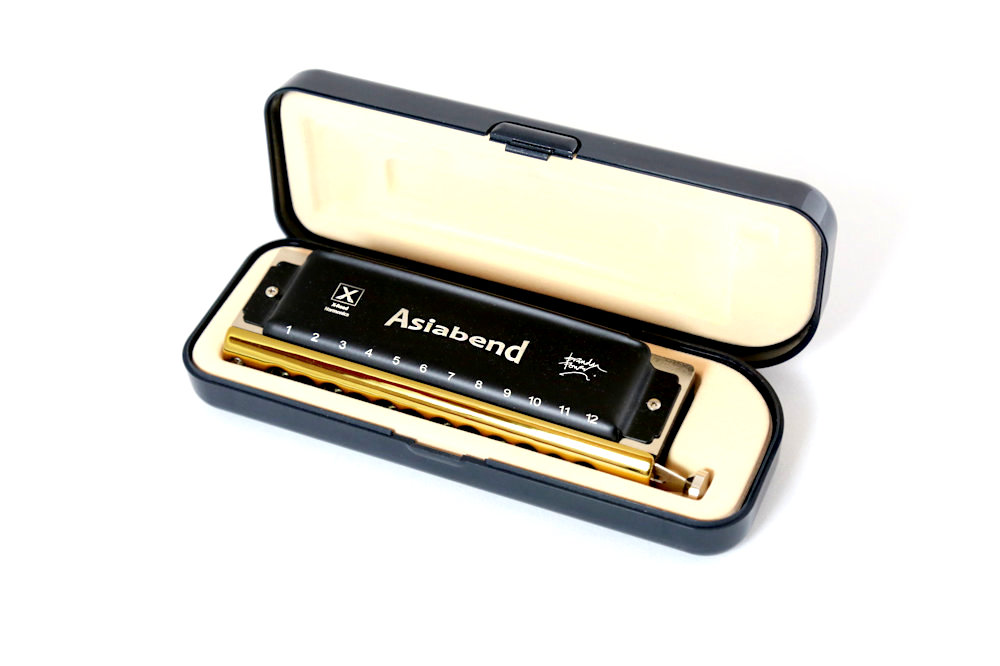 " The AsiaBend is fabulous and I hope to learn a few good tunes on it. It's a lot more intuitive than I thought it would be. "

" I received the chromabender. It is a beautiful instrument and I love it...I am accustomed to bending and I am happily getting used to this instrument. "

Chris Harrison, USA (July 2016) The ChromaBender harps arrived yesterday. I spent about an hour with them last night. Since I had arranged to take a long over-due day off work today I spent three hours working through some exercises and then played with friends on fiddle, whistle and guitar. Well I could go on for a while but the short of it is that this D may be the best harmonica I've ever touched. The G will need a little tweaking on the 3 and 4 draw so I've downloaded your videos to try that for myself. But this D is just amazing. I love playing whistles but this harp is going to get equal time.

Thanks brother. These are really special.

Michael Hawke, USA " I have had the ChromaBender for a couple of days now. I really enjoy trying to work out new phrases. It's like learning to play a harmonica all over again (I'm a Diatonic player only, until now). The different tones and bending notes really makes playing this harp fun, and possibilities are endless. You got a lot more than just a normal chromatic. This is really going to be to good. My feeling is that it's going to be a seller. Can't wait for more keys to come out once you really get going. Thank You. "

Jack Casey " It arrived this morning and is FANTASTIC!
... I am mainly a chromatic player - a pale imitation of Toots and Gregoire!! The Chromabender is the most exciting harp I have played for ages. And it is beautifully made and weighted.
All the best. "

Adam Craig " Hi Brendan I received the chromabender today . I love it! As soon as I opened the case I played samba pa ti by Carlos Santana then tried some simple blues and pentatonic scales and all the notes are here. This harp and your other innovations are fantastic additions to a world ruled by purists and technical elitists.Please continue to breathe new life into the harmonica.I hope more people will support the advancement of your x-reed tech and usher in the new age of incredible out of the box harps. "

Raymond Delekta " The ChromaBender is a wonderful instrument. I enjoy playing it.

To be a little more specific, after playing the ChromaBender over the last week I can say, historically, it is the first real attempt to address the challenges of chromatic harmonicas. There are no uncontrolled air leaks making bends so much easier and the full spectrum of notes are playable especially at the high end.

It's the first harmonica (both diatonic or chromatic) I thoroughly enjoy playing without complaint. "

Bryan Ferguson (owner of three ChomaBenders!) " Letting you know the ChromaBender has just arrived. First impression is how little air is required to sound all the notes. The reed tolerances are very tight indeed, as mentioned on your web site. Thanks for another wonderful creation to join my arsenal of three SUB30 Ultrabends and one PowerBender! "

(I received your new wonder the "Chromabender" this morning, and I am truly delighted with the quality of your accomplishments; Thank you once again from the bottom of my heart. It is a success! Keep up the good work!)