I'm proud to be able to offer the Lucky 13 in Diminished Tuning - the first time this simply brilliant harmonica scale has been offered in an out-of-the-box harp! If you want to play in all 12 keys on one diatonic (as an increasing number of players do), Diminished is undoubtedly the easiest and most logical way to do it.

The Lucky 13 suits Diminished Tuning perfectly because it gives you a full three-octave range - and my unique LOOK-DOTS on the front of the comb mean you will always be able to keep your place with a quick glance! 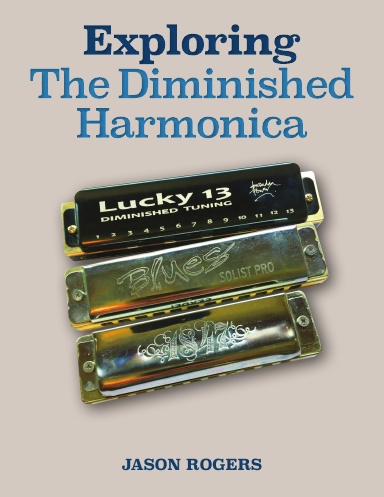 If you’re interested in exploring Diminished Tuning, this excellent info/instructional book by Jason Rogers is a must-have!

It is a symmetrical tuning (every hole has the draw reed one tone above the blow, the next hole always starts one semitone up, and every octave is the same). This means you can instantly transpose phrases into different keys and octaves, simply by moving them to different places on the harp.

That's particularly helpful for jazz improvisation, where rapid key modulation is essential to get around the chord changes. But Diminished is great for other styles too! As every draw note can be bent a semitone, it's very expressive for playing in any genre: Jazz, Folk, Pop, Country, Blues, Balkan, Middle Eastern... you name it.

Besides full chromaticism with simple draw bends, the big advantage of Diminished Tuning is that there are ONLY THREE PATTERNS TO LEARN for any scale or lick, in all 12 keys! That makes it way easier than any other diatonic harmonica tuning in existence to transpose your favourite phrases quickly to whatever key you want, without changing harps.

PHRASE MAPS help speed the process of learning, by giving a clear visual reinforcement to what's happening with the harp in your mouth. They simply involve making lines between cells in a tuning table, to indicate the path your mouth takes and the breath changes and bends involved. Because of its inherently symmetrical repeating structure Phrase Maps suit Diminished Tuning perfectly, and can help you master it quickly throughout the whole 3 octave range. Here are Phrase Maps of the three Major scale patterns that will allow you to play in all 12 keys on your Diminished harp (you can play along to me demonstrating these patterns in the VIDEO).

Now let's look at a pentatonic blues scale (otherwise known as a minor pentatonic scale) to see how it lays out in the three patterns, giving you the scale in all 12 keys. The scale numbers are 1, b3, 4, 5, b7, 1. You can see from these Major and Blues Scale Phrase Maps that each of the three patterns is very simple to play, for any harp player who can bend a draw note in tune.

Unlike every other diatonic harmonica, it is SO EASY to play chromatic scales from any note, in any range, on the Diminished Tuning Lucky 13! Check out this video and Phrase Diagrams to try it for yourself.

I hope that's whetted your appetite to try a Diminished Lucky 13 yourself! Even if you stick with your standard harp tuning for most playing, having a Lucky 13 Diminished harp in your arsenal will give you the ability to play tricky tunes and phrases that simply don't come easily on normal harps.

The comb is marked with a letter C. However, this is a bit of a misnomer because, unlike almost all other harmonicas (whose tunings are based in a particular major or minor key) A DIMINISHED HARP IS NOT ROOTED IN ANY KEY! All 12 keys are equally easy to play, using draw bends as part of their scale. C is one of the blow notes of this model. Harmonicas are traditionally designated by a blow note, so it's just a convenience really! Going on that logic, the comb marker could also have been A, Eb or F#, since they are the other blow notes (A being the lowest, in hole 1). I simply chose C because it gives a 'friendly' feeling 🙂 If the demand is there, I'll add a couple of other Diminished Lucky 13 harps with different blow note markers so they can be distinguished from this one. Hope that makes sense!