Long Ago (1980) and Far Away (New Zealand) I started making my own custom 'Stretch Harps' in 11, 12, 13, 14 and 16 hole sizes, by slicing two normal harps and joining them back together. My 13-hole Stretch Harp was in Richter Extended tuning: normal 10-hole range plus an extra low octave on the left. It wasn't easy to make, as in those days I had to add a lot of solder to the extra low reeds as well as do the cutting/joining of parts - but the result was worth it: a 4-octave diatonic with the same hole spacing as a normal harp! I became addicted to having that extra bottom-end built in, and nicknamed the harp my 'Lucky 13' (see photo down the page). 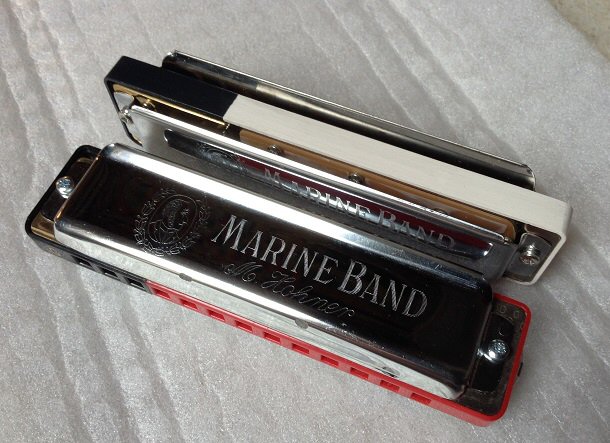 I later discovered I wasn't the only one to think of the Richter Extended idea back in the 1980s. Steve Baker did too and, after he became a consultant for Hohner in 1987, tried to persuade them to make a 13-hole harp (as noted in his 1990 book The Harp Handbook). They demurred, but did agree to make his SBS 4-octave model out of the Hohner 365 14-hole harp, released in 1989. Steve is to be commended for being the first to get a 4-octave harp into the market, and the SBS has a nice sound. Unfortunately it also suffers from several drawbacks, reflecting its origin as essentially a re-tuned version of an existing older harmonica: wider hole spacing than standard 10-hole harps, raw pearwood combs that can warp and crack, nailed assembly, limited range of keys, lowest key of only C, a redundant 14th hole, and a bottom cover not deep enough to stop the lowest draw reeds from rattling.

My hand-made 13-hole Stretch Harps had none of those issues. They had screwed construction, non-absorbent combs, standard diatonic 7.5mm hole spacing, and a deeper lower cover (taken from the Hohner 364 model). I also made 13-hole A, G and Bb harps with extended range below the standard keys - not an octave higher as with the SBS. Other players liked them too, and I decided to make a fully-optimised Lucky 13 that anyone could buy. 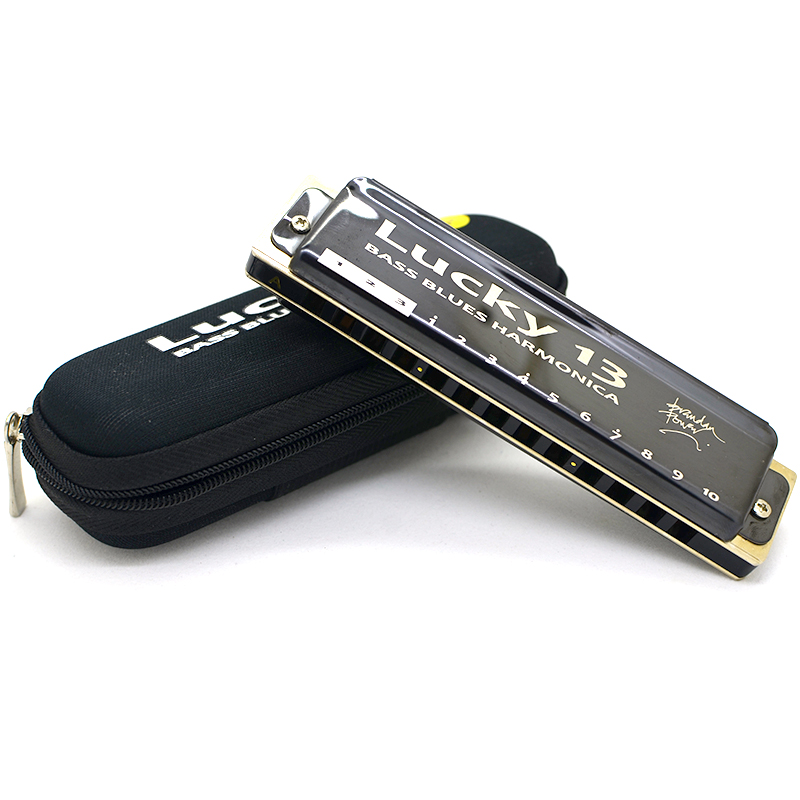 I pitched the idea to the respected Chinese Easttop harmonica company in October 2014. They liked the concept, and were willing to invest in the considerable cost of molds and tooling to make the all-new comb, reedplates, and covers for this unique harmonica. Initially released as Richter only version, the Lucky 13 was an instant success, and now comes in no less than 7 different tunings! The latest Mk2 model released in 2020 incorporated several new features to make this unique harmonica even better. Watch the video to see what's new.

The Richter Lucky 13 has it all: the standard range you're used to plus that Big Bottom, right there in your hands! Once you get used to a 4-octave Bass Blues Harmonica it is very hard to go back to the restricted range of a 10-hole harp ever again. It's two harps for the price of one: normal and low range, without having to buy/store both or switch harps in a tune. If you want to try some different tunings, there are lots to choose from: PowerBender, Solo, Paddyu-Richter, PowerBender, Diminished and PowerChromatic. Check them out via the links on the Lucky 13 Home page.